11.10.2021 Round Table “ONE BELT, ONE ROAD: OPPORTUNITIES FOR UKRAINE IN THE CONTEXT OF INTERNATIONAL EXPERIENCE” 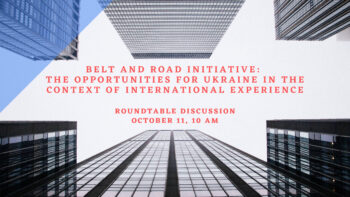 The round table “One Belt, One Road: the opportunities for Ukraine in the context of international experience” was held on October 11, 2021, at the Hennadii Udovenko Diplomatic Academy of Ukraine.

The roundtable discussion was organized by the Ukrainian Association of Sinologists, A.Yu. Krymskyi Institute of Oriental Studies of the National Academy of Sciences of Ukraine, the National Institute for Strategic Studies of Ukraine and Hennadii Udovenko Diplomatic Academy at the Ministry of Foreign Affairs of Ukraine.

The purpose of this event was to analyze the international experience of participation in the “One Belt, One Road” initiative (from now on – BRI), prospects, and opportunities for Ukraine.

Institute of International Relations Taras Shevchenko National University of Kyiv; Dr. Habil. Volodymir Panchenko, Director of the Analytical Center for Economic and Legal Research and forecasting the Federation of Employers.

Vita Golod, Ph.D. in Economics, Chairman of the Board of the Ukrainian Association of Sinologists, moderated the round table conference.

The main questions covered in the speeches of the participants were following:

1. What is the current content and concept of the BRI? How has the initiative changed after the Covid-19?

2. What are the main differences between the BRI and other initiatives launched worldwide like 3BW and Global Gateway?

3. How to reduce the political and economic risks for small and medium-sized countries participating in the Chinese initiative?

4. What lessons did the participants learn from joining the BRI? How can this experience be beneficial for Ukraine?

During the presentations and discussions, the experts expressed many original opinions and suggestions.

J. Mardell expressed an opinion that the BRI is a means of branding China’s economic engagement with the rest of the world, which provides a basis for foreign policy-building narratives rather than just specific projects.

The Chinese Belt and Road initiative should not be seen as a geopolitical tool. It holds an open position for economic cooperation and the principle of transparency, said Chinese scientist H. Zhang. The expert also noted that China supports Ukraine’s European integration strategy and hopes for cooperation with the EU to develop the Ukrainian economy.

C. Xu noted that the Covid-19 pandemic, lockdowns around the world, and disruptions in maritime transportation had reactivated BRI in terms of railway connection between Asia and Europe, making it competitive in price and speed of delivery. There is a significant increase in trade, logistics, and infrastructure projects between China and the participating countries. The importance of the initiative is not declining, but on the contrary is being restored, especially for countries with transit opportunities, Ukraine included.

Although China’s role in trade and economic relations with member states continues to grow as a result of the expansion of the BRI, there are no sufficient grounds to exaggerate the “threat” of establishing dominant control over Eurasian economies due to debt trap, said Ukrainian expert V. Syrota. The financial ecosystem of the BRI, formed from a set of financial institutions, infrastructure, experts, and professional communities, is currently not coordinated centrally and is sufficiently fragmented to implement such aggressive economic strategies. The expert stressed the need for regular “Ukraine-China financial dialogues” to discuss and resolve existing problems of bilateral financial cooperation similar to existing platforms between the EU and the UK.

J. Mardell pointed out that within the BRI framework, there is a “principle of the host country,” which assigns responsibility for selecting and implementing infrastructure projects to the country where they are implemented. This approach does not involve international expertise and coordination with other infrastructure projects, weakening their effectiveness. The scientist pointed out that the BRI has transformed, and BRI 2.0 emphasizes environmental friendliness, high quality, and sustainability of projects implemented.

At the same time, the experience of ASEAN countries on the implementation of the BRI, according to Singaporean scientist H. Liu, shows that practical economic cooperation between partners is key to the understanding of mutual interests, establishing (or restoring) effective coordination mechanisms at governmental and business levels, reviewing results periodically and flexible readjustment to changes.

Observers from the South Asian region, O. Bordilovska and H. Baqai, presented their analysis of the BRI implementation in Pakistan to the round table participants. According to their observations, the project adds space for geopolitical maneuver to specific economic benefits (infrastructure, energy, logistics, free economic zones). The BRI strengthens the connection between energy-deficient and energy-proficient regions of Asia, balances the interests of large and medium-sized players, and makes peaceful cooperation the most attractive. Both experts stressed the importance of the initiative for Pakistan, which has strengthened the country’s political and economic integration into the international environment.

Compared to other infrastructure initiatives proposed by the G7 and the European Union, the BRI remains comprehensive, practical, and affordable, D. Yefremov said. The conditions for receiving money from Chinese banks are often not transparent enough, but this feature is typical of commercial loans offered in OECD countries. The cost of Chinese infrastructure loans is close to the usual market; they contain standard repayment guarantees by the borrower.

R. von Rosen cited the example of Greece, which was on the verge of bankruptcy and where cooperation with China allowed it to obtain investment in the development of port infrastructure. At present, the capacity of the port of Piraeus has increased significantly, with hundreds of new jobs being created.

The risk of reducing European funds for infrastructure projects becomes especially acute during the crisis. That increases the attractiveness of BRI in Central European countries, said Austrian scientist A. Gerstl. For Austria, the Czech Republic, and Slovakia, cooperation with China is less critical than in Eastern Europe because they (CEE countries) are more economically integrated with EU markets and have access to European structural funds; China is not their main export. The expert noted that the BRI could strengthen Ukraine’s logistics hub between Eastern Europe, Central Asia, and China.

In terms of infrastructure renewal and deepening connectivity between Central Europe, including Poland, and Eastern Europe, represented by Ukraine, the BRI is moving slowly, which, according to Polish columnist R. Pyffel, is due, among other things, to China’s approach to regional foreign policy structuring. Poland and Ukraine are classified as two separate regions, complicating tripartite coordination to increase connectivity between the parallel BRI corridors running from East to West.

C. Xu believes that Chinese investments in the Ukrainian economy are not dependent on relations with Russia, which are assessed as unfavorable. They are more dependent on the success of bilateral cooperation at the highest level.

According to H. Zhang, China is ready to expand imports from Ukraine and promote closer industrial cooperation between the two countries. He is prepared to pay additional attention to the import of in-depth products from partner countries, simplify trade conditions between the two countries and start negotiations on a free trade agreement between China and Ukraine to remove entry barriers for Ukrainian companies on the Chinese market.

Based on the results of the round table “One Belt, One Road: opportunities for Ukraine in the context of international experience,” the following conclusions and recommendations were formed.

1. The BRI retains certain economic, trade, geopolitical, diplomatic, and geostrategic elements that have the potential to radically change relations between states and economies in Eurasia and beyond.

2. The pressure on the BRI promotion due to strategic competition between the United States and China will ease as their relations enter a stage of “normalization,” lose the signs of chaos, become precise and predictable (system of alliances, strengthening internal competitiveness).

3. The trend set by the BRI in international relations will facilitate the design and dissemination of new global infrastructure projects (B3W, Global Gateway), create competition between them, expand opportunities to overcome infrastructure constraints, and accelerate economic growth in developing countries.

4. The European Global Gateway initiative will likely maintain a narrow niche in providing high-quality infrastructure. Its significance for Ukraine will not be so much in infrastructure issues solving but in setting high standards to compare alternative infrastructure proposals.

5. The most promising direction of development in the framework of the BRI is “e-commerce of the Silk Road”, which should accelerate the “internalization” of international trade. This perspective should be considered when negotiating physical infrastructure modernization projects.

6. For Ukraine, the basis of deepening any further cooperation with China will be “to respect each other’s fundamental national interests,” which covers sovereignty, territorial integrity, and security issues.

7. The design of the BRI will retain a general framework, soft constraints, and a set of rules that will not become barriers to entry. Such an approach will provide a wide range of the interaction points between the Ukrainian economy and the economies of China and other participants.

8. In the longer term, China will gradually unify the standards at the international level to ensure the overall stability of the BRI. The standardization will combine existing international technical rules with the “marketing” of joint projects in the BRI, reducing risks through adequate government control and focusing on the links between overall development and security.

9. The risks of cooperation with China can be reduced by strengthening collaboration and attracting a more comprehensive range of partners.

10. Despite geopolitical tensions, Ukraine and China must maintain the opportunity to deepen their partnership in many sectors.

• Involve third parties for the BRI projects financing in Ukraine, including European banks with expertise in Ukrainian markets and guarantors of Ukrainian commitments.

• Given that Luxembourg is the leading financial hub for Chinese money on the BRI projects in the EU and neighboring countries, diplomatic and economic relations should be developed through economic diplomacy with this financial center. This is especially true with the background of a particular complication of diplomatic relations between Austria and Ukraine and Hungary and Ukraine, the regional banking hub on BRI projects in Central Europe.