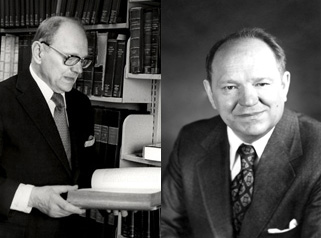 Omeljan PRITSAK (April 7, 1919 – May 29, 2006) – orientalist, historian and philologist, foreign member of the National Academy of Sciences of Ukraine (1990), prominent public figure. In 1991, he founded the Krymsky Institute of Oriental Studies of the Ukrainian Academy of Sciences and became its first Director (since 1999 – Honorary Director), Editor in Chief of ‘Skhidnyi svit’ (The Oriental World), academic journal re-established by him.

Omeljan Pritsak studied at the History Department of Lviv University (1936-1940), did postgraduate studies at the Institute of Linguistics of the Ukrainian Academy of Sciences under A. Krymsky’s supervision (1940-1941); continued his education at Berlin University and later studied and taught at Gottenheim University (1946-1952), where he received his Ph.D. degree (1948). In 1952–1962, he taught at the University of Hamburg: as Associate Professor (1952), and full Professor (1957). He initiated the establishment of the International Association of Ural – Altaic Studies and in 1958–1965 served as its President and Editor-in-Chief of the Ural–Altaische Jahrbücher (1954–1960). He also founded the Permanent International Altaistic Conference. In 1961-1964, he served as Professor and Chair of Altaic Studies, Turkology and Eurasian History at the Washington State University (Seattle, USA). In 1964-1989, O. Pritsak served as a Professor of General Linguistics and Turkology at Harvard University (Boston, USA).

In 1973, Omeljan Pritsak founded and led of the Institute of Ukrainian Studies at Harvard University. Since 1975, he served as a Professor of Ukrainian History. He was one of co-founders of the International Association of Ukrainianists established in 1988 in Naples, its Executive Board member and Head of Archeographic Commission.

Pritsak research interests included languages and history of the Turkic peoples, Scandinavian and Oriental sources on the history of Ukraine, and Ukrainian – Turkish relations in the Middle Ages.